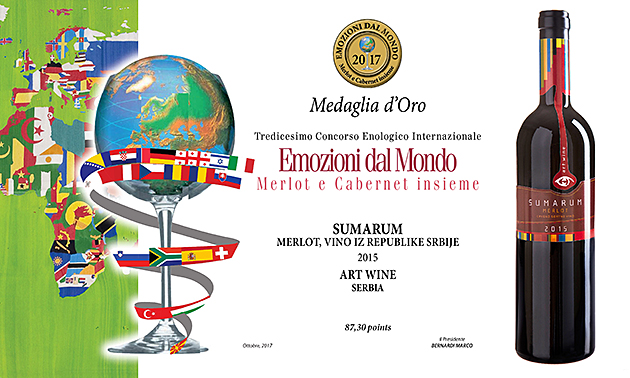 On the 23rd of October 2017, XIII international oenological competition was held under the name of “Emozioni dal Mondo Merlot e Cabernet Insieme” which traditionally takes place every October in Bergamo. In the competition for the awards there were 256 wine samples coming from 23 countries all over the world. They were judged by 76 judges coming from 29 countries and divided into seven panels of judges. Serbia got 8 medals out of 11 wine samples in total. The greatest success was achieved by the small wineries which speaks in favor of the fact that time has come for some new wine and new champions. One of the wines that were awarded with the gold medal, in a great competition, was our SAMARUM – Merlot 2015. That was the first competition for this wine and its first award. And it was gold. That is the wine we are completely positive that it is yet to show its full potential and the wine which will bring much joy to us personally as well as to Šumadija and Serbia.

Art Wine © 2018. All Rights Reserved. Site made by Pravac.com